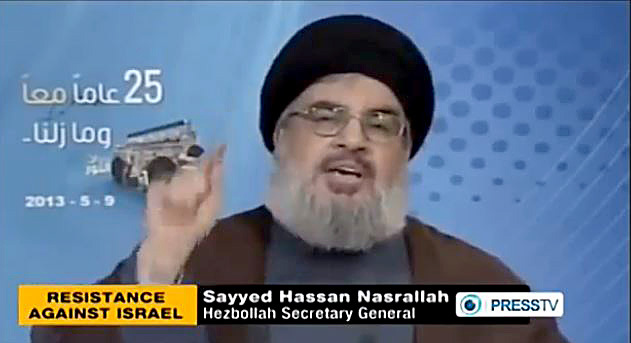 Hezbollah Secretary-General Hassan Nasrallah giving a speech on May 9.

It seems very unlikely he is really ready to go to war and open the box of Pandora. Hassan Nasrallah is too clever a man to subject the whole Levant to a regional conflict.

The next war between Hezbollah and Israel will be the last shoot-out for long, and one of them will fall or at least be severely damaged for a long time. Both sides know that. Israel will turn southern Lebanon into an underground parking lot.

And in the very unlikely case there are signs Israel may be doomed, it won´t go down without taking its foes with it.

Nasrallah in his recent speech seemed more like feeling the urge to assure his followers of a ready-for-all set of mind because there is huge questions in the Lebanese Shia community about what Hezbollah is doing in Syria. But that´s more a calculation aiming at the Lebanese political scene and home front and not Israel – elections ahead.

Nasrallah had to make a point and gather his people behind him because there is also – as reports indicate – refusal in Hezbollah´s ranks to sacrifice for Syria at the given level while Hezbollah prides itself as a resistance movement that cares first and foremost for Lebanon.

— “Moreover, some Syrian officials and sources close to Hezbollah confirmed to Al-Monitor that the option of attacking Israel with a conclusive war that might become an open regional one is being seriously discussed and prepared for once again.”

The Syrian government is about to take – or has already taken – the upper hand in the current war. The least it needs now is to open a new front, attack Israel and then possibly draw in the US.

It is on the verge of making headway to consolidate lost territory. Neither Syria nor Hezbollah can afford to fight on more fronts now.

The Russians are back in the Middle East, slipping into the vacuum left by the Americans. And they won´t let neither Syria nor Hezbollah jeopardize that current success.

It seems more likely, Russian Deputy Foreign Minister Mikhail Bogdanov held talks with Nasrallah to make absolutely clear to him – or convince and give him sufficient incentive, maybe linked to Iran – not to make any wrong move, whatever may lie ahead.