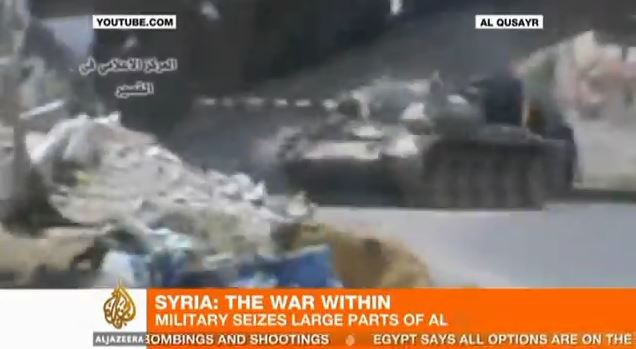 Though, some talk has become outspokenly loud and angry, authors criticizing and writing sarcastically about the U.S. role in the Syrian conflict. Especially President Barack Obama´s reluctance to intervene draws angry reactions..

Pro-opposition media outlets hype mostly insignificant opposition wins, but reality dawns: The Syrian government with support of Hezbollah, Iran and Russia has gained the upper hand and most likely set foot on the winning street.

The media will jump – albeit reluctantly – on the bandwagon and arrange itself with those reloaded realities – just as the Syrian people.

The FSA threatens Lebanon
Today the commander of the Free Syrian Army, defected General Salim Idriss, did threaten Lebanon with retaliation, should the country not get Hezbollah under control and prevent its fighters from taking on the Syrian opposition.

Idriss, of course, knows very well that the Lebanese state is in no position to do that. His clear warning was a direct and angry reaction to a – most likely – disastrous defeat looming in Qusayr.

Sure, many Lebanese hate the Syrian ruling class and President Bashar al-Assad in particular. Syria´s meddling in Lebanese political affairs since 40 years is all too well known. In the past, it did stretch out to most private and intimate levels.

Lebanon has no choices
But Lebanon does not have choices, and under such circumstances most people draw the safe option.

If General Idriss threatens retaliation and would even put it into reality that will backfire on him, the FSA and the Syrian opposition as whole. They will lose supporters in Lebanon and – as a result – safe havens and freedom of movement.

The majority of people in Lebanon does not want to see more shelling on border towns or even FSA and jihadist Nusra Front car bombs in Beirut and Hezbollah strongholds. And for sure, most Lebanese don’t want to witness the northern city of Tripoli burning.

Current choices, which constrain and thus dominate life, are similar to the 2006 war between Hezbollah and Israel: Many Lebanese don’t like Israel, but they can live with it. What they really despise is exposing their often complicated existence to even more chaos and lethal threats, as Hezbollah has done at that time.

That´s why – behind closed doors – even staunch Hezbollah supporters did curse the Shiite organization in 2006. Residents of Christian-dominated regions were boiling anyway.

Lebanese Christians
Now, Christian don’t want to be drawn into a Shiite-Sunnite conflict, though their major political parties are affiliated with respective Muslim-dominated representatives.

The Free Patriotic Movement (FPM) of Christian leader Michel Aoun has a Memorandum of Understanding with the Shiite Hezbollah organisation.

Samir Geagea´s Lebanese Forces are allied with the March 14 political bloc, of which Sunni leader Saad Hariri´s Future Movement is the heavyweight.

This is an estimation of possible future developments that we anticipate. Tomorrow we will take a look at Hezbollah´s political weight in Lebanon and the country´s stability.